My long-awaited trip to Kyushu in Japan to see Hidden Christian historical places (隠れキリシタン) finally came to fruition from August 9 – 15, 2022. I had originally planned to go to the 5 outlying islands off of Nagasaki called “五島列島” in Japanese, but in checking the web a couple of days before going, saw that they didn’t really want anyone outside of Nagasaki prefecture coming there, as they are scared of corona. OK. So instead, I went to some of the most western area of Nagasaki where there were quite a few hidden Christians, and had a meaningful time seeing historical places, and just enjoyed being in a totally different environment for a few days.

I like to ride trains and see the sea, and got my heart’s desire full of both! I also got to see some castles, and best of all, a Seventh-day Adventist friend who I’ve only seen once before, and that was at a little self-supporting place in Saitama prefecture that had a school for Portuguese speakers back in 2009.

This post will be about just the first 3 days of the trip.

I bot a “青春１８切符” which translates to “Youthful 18 ticket”. There’s no age limit, and you buy a ticket for around 12,000jpy (100usd) and you get it stamped each day you use it, and you can use it for any 5 days in a period. Summer has the longest period of us: from July 20 to September 10, and you can use that ticket any 5 of those days, or of course you can have 5 people use it all together in just one day, or whatever. It’s very convenient. However, you cannot ride any of the fast trains. So to travel the 758km (471miles), I had to take the first train at 5:13, and arrived in Sasebo at 22:27. I have never had a problem with motion sickness on anything before, but I felt woozy for several hours after getting off. I had supper of noodles on the platform of the Tosu station, something I used to do a lot but has nearly completely disappeared from Japan. The lady running it looked like she was around 80: 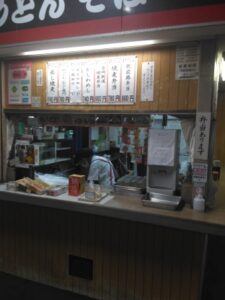 So I arrived in Sasebo at 22:27, as the trains in Japan are nearly always on time (only one train was late on all this trip – about 9 minutes), and I promptly went looking for the Sasebo SDA church which I easiy found, and took this picture: 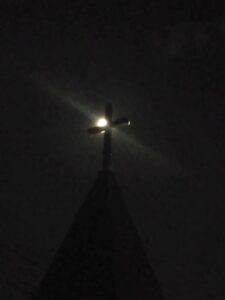 I went back to this church on Sabbath, and will have more pics of it in my next post.

That nite I slept out on a deck in a park, and the next morning I woke up to read the sign saying that this was a day-camp spot. What a lucky choice for taking a rest! Then I got on a bus and took a 75 minute ride to Hirado. For a few years in the 1500s, Hirado really boomed with trading with the Dutch and English, so much so that it was called “Western capital of Japan” for a very short time. But before long the Christians were expelled, foreigners driven off, and the town is now just another rapidly ageing country town in Japan, except for its historical sites. The panorama pic at the top of this post shows the city of around 70,000 people, and you can see a castle on the far left if you look closely.

The strange lady at the information center helped me find a dormitory where I stayed two nights (3,000jpy/night); 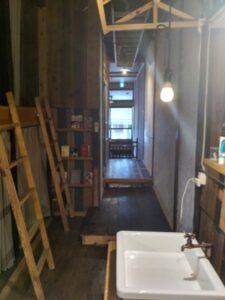 The next morning I ate my fruit, nuts, soybeans, and bread out by the dock, but when it started raining I ducked into a public bathroom. Bathrooms are usually very clean in Japan, but this one was extra clean: 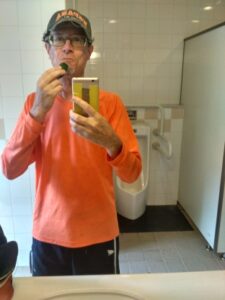 Churches and Temples together

I walked around the town, and came across the most famous Instagram spot of the whole town, a place where you can get a pic of the Xavier Cathredral in the background (Xavier came here back in the 1560s or so), and the usual Japanese temple in the foreground: 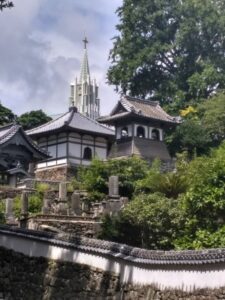 The next day I headed over to Ikitsuki island, another 45 minutes or so by bus. It mostly is just up and down coastline road, with a bit of the interior of Hirado island. Many hidden Christians used to live in this area. Even now there are some hidden Christians practicing their ancient style of worship there, even tho Japan is of course a nation where you are free to worship any way you want. In fact, this is really weird to me, that there is one village here that is a UNESCO World Heritage Site, not because of any natural wonder there, but because the people worship their unusual style their ancestors did in the past 200 years. It isn’t real Christianity to me, as the form is mostly Buddhist/Shintoist, with the objects of idol worship being changed to imagined angles on paintings that look like crosses, or Buddhist-looking Marys etc.

As soon as you get onto Ikitsuki island, get off the bus and walk a bit to the left to a museum. They have lots of whaling exhibits on the first floor, and the Hidden Christian material on the 2nd. 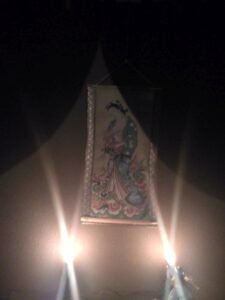 Yes, that’s supposed to be Mary and baby Jesus. The next pic is of “Fumie” (踏み絵) which was a way to rat out Christians around 400 years ago after the government banned Christianity in Japan. They would take these, and force everyone in the village to step on it. If someone did not step on it, they were fined or ostracised or eventually put to death. Many people were martyred:

If you are interested in learning more about “Fumie”: here is the Wiki link.

Here is a memorial statue to a group of women who had accepted Jesus from the teaching of the foreign missionaries, so were considered unclean by the local people, and banished to Jakarta Indonesia: 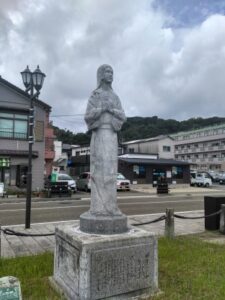 Even the leader of the southern part of Ikitsuki island was put to death with his son at that time. Now there is a memorial for him and all the martyrs there, and it is very nice to see a large cross up on a mountain overlooking the village: 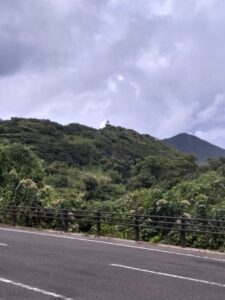 After the museum I walked up to the large cross to see the memorial, and get a nice view to eat my lunch of rice balls and cucumbers: 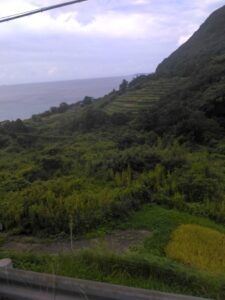 I did learn on this trip the difference between the Hidden Christian (隠れキリシタン) believers and the Underground Christian (潜伏キリシタン) believers. They are all usually lumped together, and even very few Japanese know of the difference. The main difference is that the Underground Christian people got their teaching straight from foreign missionaries, and were Roman Catholic, even to the point of saying many things in Latin and/or Portuguese. The Hdden Christian peope got their faith from other Japanese, and never really became Catholic, basically mixing all their other religions in with a few pics of Mary and Jesus and the cross and using some “holy water” for ceremonies. Yes, martyrs came from both groups, and yes, there are strangely, still some Hidden Christian people now.

Not sure if you can notice it or not, but many of the paddies are not being worked anymore, and have gone to weeds. This is a problem I saw all over my trip – many rice fields are not being worked anymore, and have reverted to weeds. Probably around 3 -5% of those not being sown in rice now have been transformed into solar energy stations. Of course having weeds grow next to your rice field is not good, as many of the weeds take hold in your rice paddy too, so it is a serious problem. But with Japan’s ageing society, and younger generations’ desire to leave the countryside to find a job in the cities, this trend looks like it will continue.

Oh yes, in the basement of the museum was a free area like I’d never seen before – a dry ocean! It was really cool to walk around like you are in the bottom of the sea, looking at all the amazing creatures God has made: 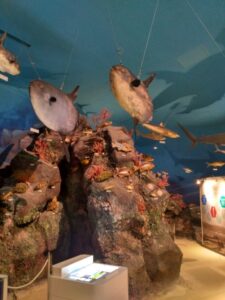 After walking around and getting royally sunburned, I caught the bus back to Hirado, but got off before the end. I wanted to do some hiking, so climbed up this mountain to get a beautiful view:

There was a really pretty mountain path I walked on a bit: 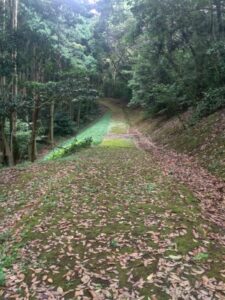 But it was getting dark, and a bit scary, so I backtracked to the road and walked down to Hirado. On the way I came across this karaoke place that accounts for a lot of the stolen road signs in America – ha!: 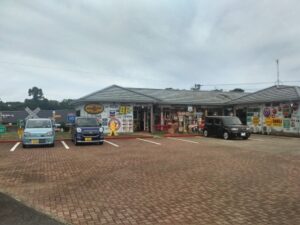 The first evening in Hirado I ate udon noodles at a little shop that was basically someone’s old living room. All 4 people there were probably over 80 years old, two of them customers, and the father with what looked like a broken leg sitting in front of the TV, and the mother doing the cooking in the highly messy place. But the noodles were good, and the hot food made my stomach happy. I felt good the next evening tho just eating near the harbor feeling the wind on my cheeks and toes and watching the crows fly around.

This cat in an alley in Hirado caught the mood of the moment quite well: 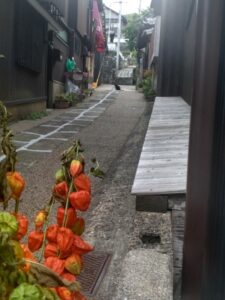 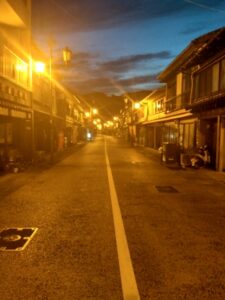 That’s enough for this post. Look for the continuation, including the wonderful experience at Sasebo SDA Church, in the next one.
To see part 2 of this trip, please click here: http://great-controversy-movie.com/blog/sasebo-sda-church-and-hidden-christians-in-shimabara/

1 thought on “Trip to see Hidden Christian history in Japan”