Last week I downloaded an interesting-sounding audio sermon from the net by a SDA pastor titled “Learning From Egypt, Babylon, and France”. Obviously this is going into Revelation 11 and 13 territory, and there were several interesting things mentioned in it, However, the same, standard, unbiblical SDA position that the Two Witnesses are the Old and New Testaments was preached, startling me to hear again such unbiblical preaching glossed over in a veneer of biblical study.

We Seventh-day Adventists better get to studying deeply soon. As Revelation 11, 12 and 13 start unfolding around us, how are we going to support a belief that is so contrary to the plain reading of the Scriptures?

Rev 11:1 And there was given me a reed like unto a rod: and the angel stood, saying, Rise, and measure the temple of God, and the altar, and them that worship therein.
Rev 11:2 But the court which is without the temple leave out, and measure it not; for it is given unto the Gentiles: and the holy city shall they tread under foot forty and two months.
Rev 11:3 And I will give power unto my two witnesses, and they shall prophesy a thousand two hundred and threescore days, clothed in sackcloth.
Rev 11:4 These are the two olive trees, and the two candlesticks standing before the God of the earth.
Rev 11:5 And if any man will hurt them, fire proceedeth out of their mouth, and devoureth their enemies: and if any man will hurt them, he must in this manner be killed.
Rev 11:6 These have power to shut heaven, that it rain not in the days of their prophecy: and have power over waters to turn them to blood, and to smite the earth with all plagues, as often as they will.
Rev 11:7 And when they shall have finished their testimony, the beast that ascendeth out of the bottomless pit shall make war against them, and shall overcome them, and kill them.
Rev 11:8 And their dead bodies shall lie in the street of the great city, which spiritually is called Sodom and Egypt, where also our Lord was crucified.
Rev 11:9 And they of the people and kindreds and tongues and nations shall see their dead bodies three days and an half, and shall not suffer their dead bodies to be put in graves.
Rev 11:10 And they that dwell upon the earth shall rejoice over them, and make merry, and shall send gifts one to another; because these two prophets tormented them that dwelt on the earth.
Rev 11:11 And after three days and an half the Spirit of life from God entered into them, and they stood upon their feet; and great fear fell upon them which saw them.
Rev 11:12 And they heard a great voice from heaven saying unto them, Come up hither. And they ascended up to heaven in a cloud; and their enemies beheld them.
Rev 11:13 And the same hour was there a great earthquake, and the tenth part of the city fell, and in the earthquake were slain of men seven thousand: and the remnant were affrighted, and gave glory to the God of heaven.
Rev 11:14 The second woe is past; and, behold, the third woe cometh quickly.

Let’s break it down verse by verse.

1. “temple of God” definitely means the true church that is following God, and possibly also a physical temple somewhere sometime.
2. “holy city” may mean God’s true people, but in the Bible, it always refers to “Jerusalem” the city in Israel.
3. Was the Bible only given power “1260 days/years”? No. Possibly they were in “sackcloth” during the Dark Ages.
4. “Two olive trees”. Not sure, might be OT and NT, or maybe something else.
5. This is one of the 2 strongest verses showing that the two witnesses cannot be the Old and New Testaments. Did fire come out of the OT and NT during the Dark Ages and kill anyone? No.
6. This is power the 2 witnesses have. Yes, the Bible talks about these supernatural things.
7. Have the OT and NT ever “finished their testimony”? No. Have they ever been “overcome”? No.
8. “Our Lord was crucified” in Jerusalem in Israel. Only there. This is super-clear.
9. How many people of China, Japan, Brazil, Indonesia, India etc. even heard of the French Revolution in 1798 when it was happening? Basically zero. And nobody tried to put them in graves either, so no one could have tried to prevent them from being put in graves!
10. No one except maybe inside France sent presents to each other when France officially abolished the Bible in 1798 or so.
11. The “Spirit of God” left the Bible for 3 1/2 years around 1798? Really?! How can any Seventh-day Adventist who professes to believe the Bible believe this?
12. The Bible did not suddenly go from being persecuted to being greatly exalted around 1798. Yes, the Bible Societies were very strong in the late 18th and early 19th centuries, but there was nothing special at that time to be specially noticed by the Bible’s enemies.
13. There was no earthquake of any note in France around the 1798 time frame. There is absolutely nothing in history to point to showing that people who hated the Bible in France got really scared about seeing the Bible being exalted by God.
14. No “woe” has come quickly at all since 1798. It hasn’t. (To be honest, none of the woes or Trumpets have had their final fulfillment yet here July, 2021. 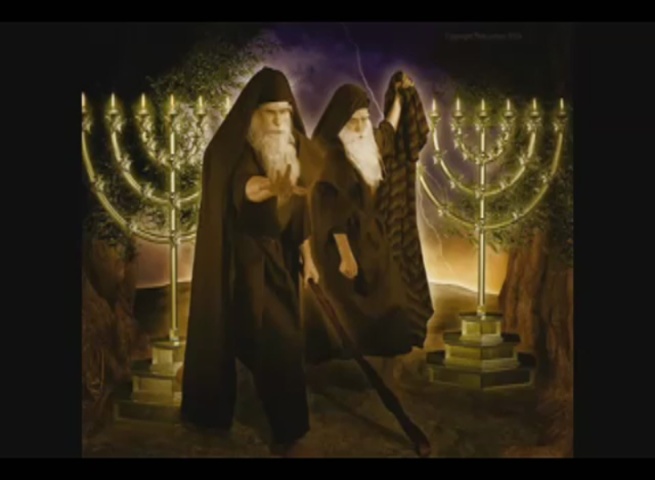 So we see that if we believe what the Bible says, the two witnesses cannot be the Old and New Testaments.

I call on all my fellow Seventh-day Adventists to study what you believe, to show yourself approved unto God. Please let me know in the comments what you believe the Two Witnesses to be.